Born in St. Ann's Nottingham at the end of 1944 Eileen has lived all her life in Nottinghamshire.

At the age of 7, her life became commensurate with business affairs when her mother and father moved into an off licence and she well remembers delivering groceries at a very early age to her parent's customers.

After leaving Sycamore Girls School at the age of 16, having stayed on an extra year to take an RSA Commercial Course run at the school Eileen began her working career as an Office Junior and subsequently Secretary to a Senior Partner at a firm of Nottingham solicitors.

In 1961 Eileen was introduced by a cousin of her father's to the Conservative Party and she has been an active member ever since and indeed Eileen and Mick were the youngest Young Conservatives to get married in the area when in 1965 Eileen married Mick Atherton.  By this time Eileen was Secretary of the Radford & Manvers YC Branch and Mick was the Chairman.

They started their married life living in Attenborough and at the end of 1966, Eileen left work to have her first daughter, Helen.

By the end of 1968, Eileen and  Mick had moved in an off licence at Central Avenue, Beeston which they kept for 34 years during which time Eileen had her second daughter, Carole.

Sadly Mick died in April 2012 having suffered prostate cancer for over 6 years.

Eileen is now the proud grandmother to 4 grandsons.

Her hobbies are being School Governor, genealogy, watching tennis, reading, gardening and she is an ardent fan of the computer as a means of quick communication and information.

Eileen has recently taken over as Chairman of Age Concern Chilwell.

Eileen was re-elected as Secretary of the Broxtowe Conservative Association at the AGM held on 7th March 2020. 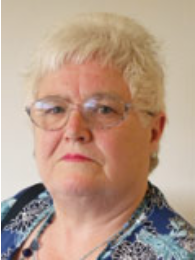